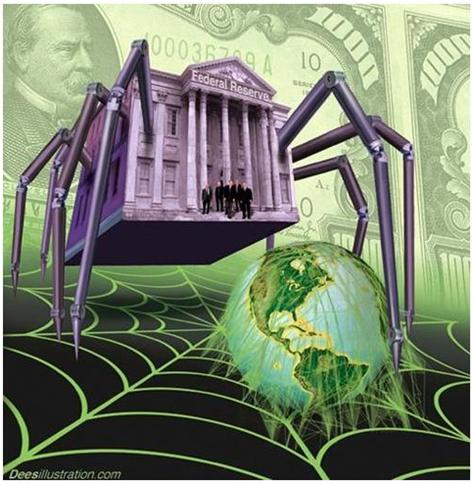 Well they’re at it again!!!

I don’t think I have to tell you that when there is any type of corruption, political or otherwise, to find the source of the corruption, in most cases, all you have to do is follow the money; and that same thing applies here, within our own government.

If you want to know who pulls Obama’s strings, and who pulled Bush’s strings before him, and Clinton’s before him; and also who pulls the strings of most of our Congressmen and Senators today; and who also manages and manipulates our news, here at home, to keep most Americans in the dark; then you have no further than to look to a very small group of men who control and own, not only our Federal Reserve Bank, but the entire international banking community at large.

Mind you, these decisions that were made to bail out Europe, will certainly affect ALL of us here in the United States; yet nevertheless, these decisions were made without anyone asking for the American People’s approval or opinion… and yet these same Bankers are using our taxes dollars and our currency to shore up the European economy, at a time when our own economic conditions here at home couldn’t be any worse… when we are ourselves already over 12 Trillion Dollars in debt!

Folks, we cannot any longer afford to have this current leadership in Washington continue; nor can we afford to make the mistake again of thinking by merely electing another Republican Administration, like Bush, that things will change. All we do is go right back on the same merry-go-round… and nothing changes! The reason is both our primary political parties are themselves controlled by this same group.

If our country is to ever change, and if we are going to have our Constitutional form of Government restored, then we will, at the very least, have to have men and women in our government who are representing our interest and that of our children, which is not the case with the current lot… and nor has it been for many, many years. And you have over 12 Trillion Dollars of debt as evidence of that fact!

We need men and women in Washington DC who will start by telling the American People the truth, about who the FED is, about who controls and owns it, and how they are, and have been, ripping us off for over 100 years; and are today undermining both our government and our U.S. Constitution!

The American people need to know the truth; we need also to start over again, and clean house, from the bottom up. Let us rid ourselves of these professional politicians, whose agenda is controlled by foreign interest; and most importantly let them take us out from under the control of these International Bankers, these criminals really; and return us to the Constitutional Republic that our forefathers originally intended.

From: Larry
Subject: BOMBSHELL! Fed bailing out Europe! What to do …