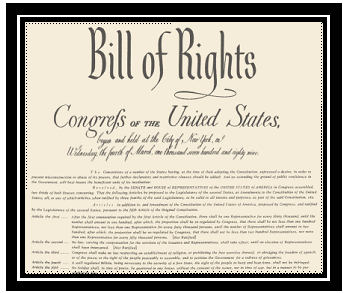 This document, together with the rest of our U.S. Constitution, still represents the Highest Law of our land; but it has no real power until “We the People” demand its enforcement!

At issue here are our Second Amendment Rights, which state as follows:

A well regulated militia, being necessary to the security of a free state, the right of the people to keep and bear arms, shall not be infringed.

There are certain things that have to happen, before a nation is taken over by a tyrannical dictatorship:

If you will note, ever since 9/11; and really before 9/11, but 9/11 became the excuse, under a Republican administration (no less), to start whittling away at our Constitutional Rights, under the guise of our maintaining national security; and please note that everything that was signed into law, by means of Executive Orders, was done by George W. Bush, and is today being implemented by Barack Obama!

Like I’ve been saying folks, we are being lied to, deceived and manipulated, not just by our government officials, who are totally on board with this “New World Order” nonsense; but we are also being lied to by our News Media!

It is not by accident that this story about what Secretary of State Hilary Clinton is doing, right now, to take away our 2nd Amendment Rights, got buried under other news stories.

Would you consider this, our government for years now has been ignoring our U.S. Constitution; and this started when they first bowed to the demands of the Rothschild’s International Banking Cartel, and changed our government from a Constitutional Republic, to the UNITED STATES CORPORATION, which happened back in 1871, to keep our nation from defaulting.

Folks, this has been going on for quite some time, and it has only accelerated of late, as we near the end of this age, and Satan knows that his time is running short.

Folks, wake up please… and begin to pray, and begin to act like our future, and the future of all future generations are at risk… because they truly are!

For sure… what we don’t defend and what we don’t appreciate, and take for granted, we are apt to lose! This was the case in pre-Leninist Russia; in pre-Nazi Germany; and it is happening today in the United States of America!

We are being manipulated and played today, as a Stradivarius violin, by members of our own government, elected as they are, who have been bought and paid for by these same Globalist Bankers, and they are selling us all down the river.

From: smsmasterwelder
Sent: Tuesday, May 18, 2010 4:37 PM
To: theskipper@cox.net
Subject: Fwd: Obama takes the First Major Step in a Plan to Ban All Firearms in the United States