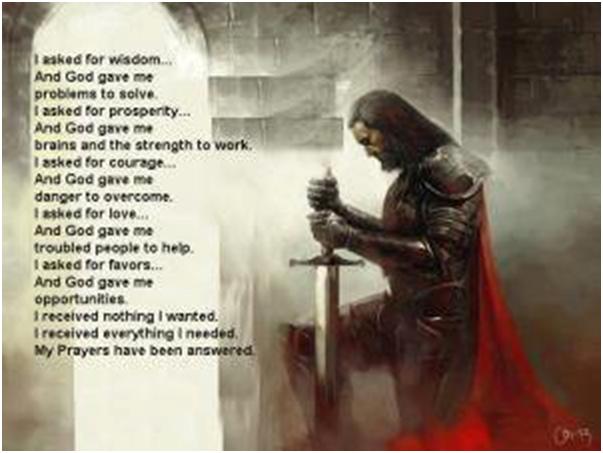 The above poem points out a very important lesson in life, for the Covenant Child of God.

It is ironic for the reason, that unbeknownst to a lot of people, who possibly have not familiarized themselves well enough with the ways of the Lord, from having meditated upon and studied His word, that God has been answering their prayers all along, and has been doing so in the affirmative!

Consider for a moment the examples given in the Manual for Life (the Holy Bible), in how often God has purposefully and intentionally allowed and sometimes even led His Children into tribulations and problems.

The oldest book in the Bible is the Book of Job, and in it we are given a glimpse behind the veil, were we find the Accuser of the Brethren , Satan standing in God’s presence; where we are privy to hear the following discourse:

“Where have you come from?” The Lord says to Satan.

And Satan answered, “I have been patrolling the earth, watching everything that’s going on.”

Then the Lord asked Satan, “Have you noticed my servant Job? He is the finest man in all the earth. He is blameless—a man of complete integrity. He fears God and stays away from evil.”

To which Satan replies, “Yes, but Job has good reason to fear God. You have always put a wall of protection around him and his home and his property. You have made him prosper in everything he does. Look how rich he is! But reach out and take away everything he has and he will surely curse you to your face!”

Then the Lord said, “All right, you may test him; do whatever you want with everything he possesses; but don’t harm him physically.”

So Satan left the Lord’s presence.

Then we have Father Abraham, who is asked by God to take his wife Sarah, and his entire household, servants, possessions, and all, and travel to a new land, but without God saying where or how long it would take. That was the first test, to see if Abraham would even obey.

After all, it was no small thing, (and neither would it be today) to just pick up and leave the security and comfort of your home and family, and travel to some distant land, and not even know where you are going.

God didn’t given him a travel itinerary, but merely told him to leave his family and home, and that He would tell Him when he had arrived at his new home.

To make matters worse, when he arrived in the “Promised Land” he found himself having to live in tents; and to make matters even worse, he landed right in the middle of a famine… with no food!

I’m also sure that Sarah was not exactly thrilled by all of this, but you will please note that she followed him anyway.

Then what does Abraham do? He takes it upon himself, now facing starvation, for lack of food to feed his family, to go into Egypt; however he did not consult with God, but took it upon himself to do this.

The result was he ended up prostituting his wife, not once, but twice, just to save his own skin.

As it happened, he found out, upon arriving in Egypt, that pharaoh had this thing for attractive women, and was known to kill their husbands, so that he could keep their wives for himself; and so Abraham, in order to avoid being killed, he told pharaoh that Sarah was his sister, not his wife.

And still Sarah stayed with him, even after that!

Well, as we read our Bible, we can find story after story, and example after example just like this, and this is true all throughout the Bible of how God would allow his children to be tested, to suffer lack, and to be in difficult situations, in order to test them, and to see if they would obey Him or not?

We find this happening many times, even in the New Testament.

All of these are examples for us to learn from; because God is not about making us comfortable and at ease; but rather God’s purpose in all of this, is to prepare us for service in His Army, in His Kingdom, and for eternity, as members of His Chosen Family!

What a privilege it is to be included in this group, and to have this opportunity presented to us. We must first be born-again; but then afterward, unless we understand the goal, and the culture of heaven, after having read our “Operations Manual” (our Bible), then we are inevitably are walking blind and are severely handicapped.

The above poem points this truth out; and it also shows us that even though we may feel as though the reason why our lives are so hard is because God has forgotten us, which by the way is what Satan is hoping we will believe; but the reality is and the truth, is that God is closer to us in the fire, than at any other time. Selah