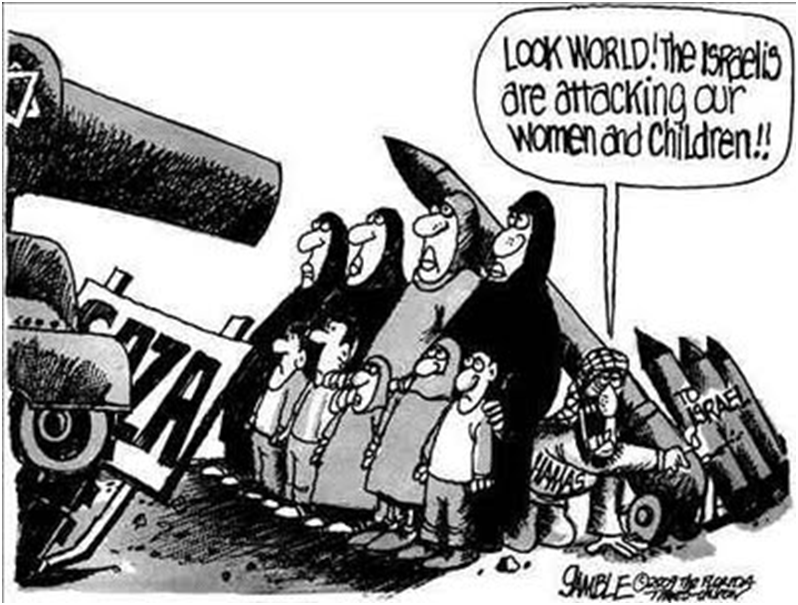 This is a picture of what is really happening, that we are not being told…

And here is more evidence to that fact, that what we are being told is not true; as here in this video are more examples of the truth that is behind the news, that remains hidden from the American people and from the world:

While Palestinian forces have traditionally used innocent civilians as shields (as is pictured in the above cartoon), against Israeli attacks, hoping that there would be lost of innocent civilian lives, for propaganda purposes; Israel has bent over backwards, even going to the point of dropping pamphlets before an air strike, warning innocent civilians to flee an area before it is bombed.

This is not reported on the news, and I can tell you that no other army that I know of has gone to this extent, and has taken these measures, to protect innocent civilians; and yet all of that is virtually ignored by our media, and all we hear are lies.

There is an agenda, and I’d like you to listen to this lady, Bridget Gabriel, who talks about that agenda, having grown up with it in her home nation, Lebanon, where she lived as a child; and today she is warning us here in the United States of what that agenda is:

Would you please stop and consider for a moment, that just as the Bible says would happen in the last days, we can see it unfolding right before our eyes, as the entire world today is turning against the nation of Israel; and unless things change here at home, from the looks of things so far, with this Obama Administration, so is the United States, folks… and we cannot afford to allow that to happen!

I just wonder how we here in the U.S. would fare under the same circumstances and conditions, if we had to put up with these kinds of attacks in our cities, on innocent civilians, including women and children?

I dare say we wouldn’t tolerate it at all; and yet not only are we not supporting our closest ally, Israel; this administration is today, under Obama, siding with Israel’s enemies; as is also our major media outlests… and may God have mercy on us all if we allow this to continue!

This spinning and managing of our news to support certain hidden agendas has to stop folks, as well all the lying of our government officials and the media to the American people!

Below is just another example of what I’m talking about; in what truly is going on in Gaza today, that is not being reported in our media here at home.

We report, you decide…

OUR PALESTINIAN “FRIENDS”
For all who believe the lies and propaganda about Israels attacks on civilian targets.
NOTE HOW IT IS FITTED TO SHOOT MISSILES 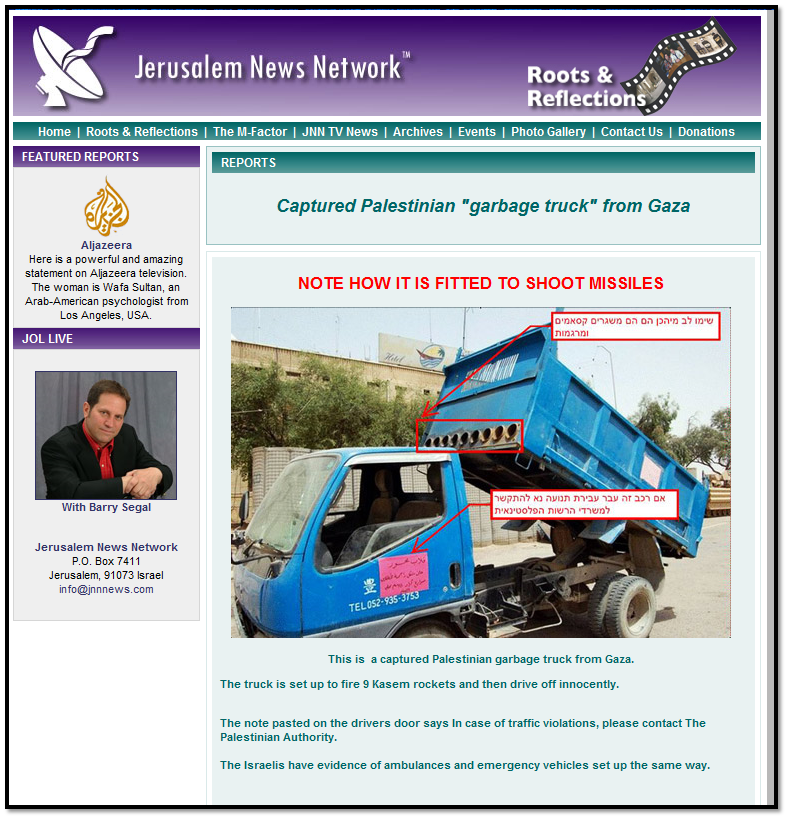 Doesn’t it make you all “warm and fuzzy”

that Obama just gave the Palestinians 400 million dollars from your taxes?