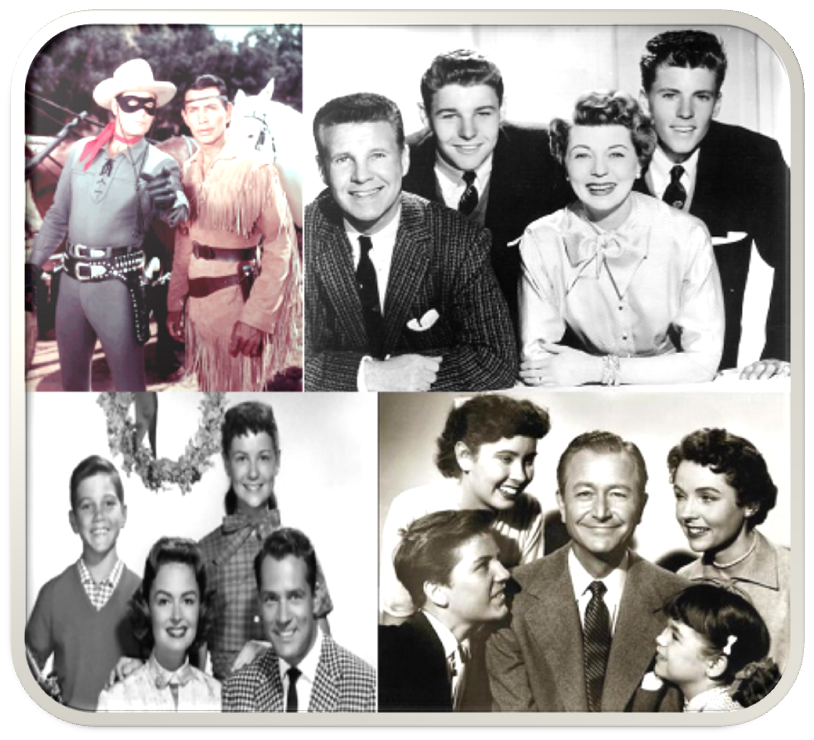 Wholesome Family Entertainment in the 50’s and 60’s verses today… and oh boy how it has changed!

My thanks goes out to John today, for forwarding this Long Ranger Creed to me.

I think if there is any one thing that is missing today in our society and our culture; it is something that is today considered “Old Fashion and Passé,” and that is in the lack of Christian values, as once was portrayed in our media.

It used to be there was always a clear line that was being drawn between what was right and wrong, and good and evil; but that is no longer the case! There was a time when there was no clouding of these issues, as it is today.

I know as an example, some years ago (in the 70’s) I used to work at the ABC studios, on Prospect Ave., in Hollywood, where I worked as a Page in Guest Relations. It was our job to provide security on the various sets, and provide audience control and such; and one of my jobs was to answer the phone in the control booth; and I actually sat next to a person whose job it was to screen and sensor the content on the various shows that were being produced.

Well I can tell you this, things that are allowed today would never have passed muster back in those days… and that includes in both what was allowed in language and also in content.

Today our children are being raised on a much different value system, and actually what is being taught in our public schools and also in our culture, in this so called progressive ideology and value system, is that  there is no foundational bases for good and evil, or for right and wrong… that it is all relative; and so the effort is clearly made today to glorify evil; and also to cloud the lines between what is considered right and wrong, and good and evil.

There was a book I remember reading in college that was written by Marshall McLuhan, entitles The Media is the Message; and the point of the book was to point out the power that the media has in our culture to determine and to set our value system and our morals.

Once it was the purview of the Church, to be the gatekeepers of society; but today that job has been turned over to the talking heads on the evening news, and our Hollywood stars; and it is very definitely the media, that over time, have been the ones who have set the standards and morals for our society, as to what is good and evil, and what is right and wrong.

You can see this all over today in our Sitcoms that are so popular today, and also in the drama and action features that we have.

No more do we have the traditional Judaic/Christian values being exemplified, in having a normal family being portrayed, where there is a mother and father, who are portrayed in any traditional fashion, as say you once could see in programs like “Ozzie and Harriet,” The Donna Reed Show,” or “Father Knows Best;” but rather today if there is a father in the picture his character is most often portrayed as a bumbling fool, and it is the kids who run the house; and certainly in most cases today the father figure is not portrayed in a good and wise light.

Also, you will find today that many of the characters, in both the sitcoms and action/adventure dramas, are often being portrayed today as being homosexuals, and you actually see stories being written today, portraying everyday life situations, where this lifestyle is made to appear as natural and normal; and the way they do this is to inject humor, and to get you to laugh at the situations that are being portrayed; that in years past would have been considered taboo, and would never have been allowed; but today it’s no big thing.

Also, you will note that quite often if a person is portrayed as a “Christian” today, most often he or she will be the shady character, the phony, or the raving lunatic, who is a mass murderer, or worse.

Satan has well used the media to his advantage; and I would even say if we can attribute our present condition today, in our society, and the sad and immoral state of so many of our governing officials and leadership in both the public and the private sectors, who have been taking us on this downward spiral, and this moral and ethically landslide for years now, I would have to say that the major influence and cause of today’s lack of morals and the absence of any moral standards and compass for our society… is in fact the media!

My position is that if we, who are Christians, are to take back our culture, then we are also going to have to take back the media; and we are going to have to start producing programs, movies, music, and all forms of entertainment that are both well done and entertaining; that are every bit as real and professional, and even more so, than what we see coming out of Hollywood today.

I mean come on folks, we do have the Holy Spirit—who is by the way very creative—on our side; and so instead of the media being used in a negative fashion to undermine our culture and society in a negative way; why not use it to turn our culture around and aim it back in the right direction… back towards God?

Anyhow, that’s my two cents for today… how do you feel?

2 thoughts on “The media is the message… a look at how our media has changed our culture for the worse!”