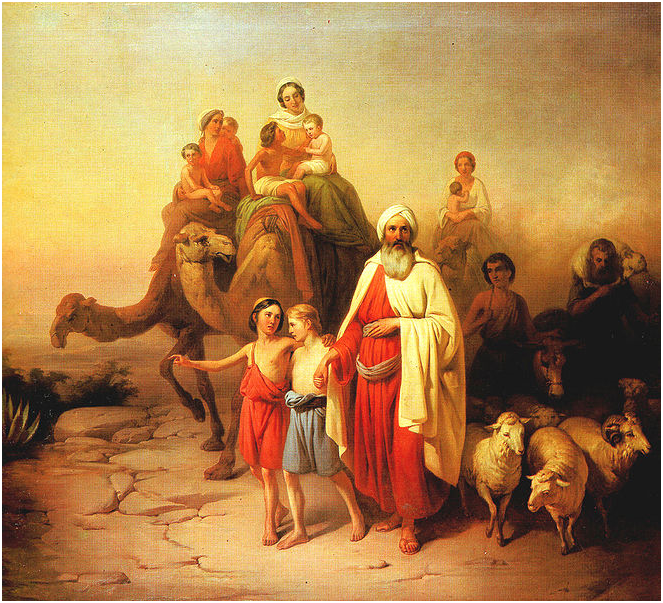 The Bible says of father Abraham that:

“He believed in the LORD; and he counted it to him for righteousness.”

God has decreed that father Abraham be the example of FAITH that God looks for as the bases for relationship between Himself and His offspring, of all those who are in covenant relationship with Him, who are created in His image and after His likeness, of those who are the descendants of Adam’s seed!

In Genesis 17 we read where God says to father Abraham:

“I will make you exceedingly fruitful; and I will make nations of you, and kings shall come from you.

Also I give to you and your descendants after you the land in which you are a stranger, all the land of Canaan, as an everlasting possession; and I will be their God.”

And in Zechariah we read of what we know today as the Israeli Palestinian Conflict:

The Coming Deliverance of Judah

1 The burden[a] of the word of the LORD against Israel. Thus says the LORD, who stretches out the heavens, lays the foundation of the earth, and forms the spirit of man within him: 2 “Behold, I will make Jerusalem a cup of drunkenness to all the surrounding peoples, when they lay siege against Judah and Jerusalem. 3 And it shall happen in that day that I will make Jerusalem a very heavy stone for all peoples; all who would heave it away will surely be cut in pieces, though all nations of the earth are gathered against it.

4 In that day,” says the LORD, “I will strike every horse with confusion, and its rider with madness; I will open My eyes on the house of Judah, and will strike every horse of the peoples with blindness. 5 And the governors of Judah shall say in their heart, ‘The inhabitants of Jerusalem are my strength in the LORD of hosts, their God.’

6 In that day I will make the governors of Judah like a firepan in the woodpile, and like a fiery torch in the sheaves; they shall devour all the surrounding peoples on the right hand and on the left, but Jerusalem shall be inhabited again in her own place—Jerusalem.

In the next verses we learn how Israel will recognize her Messiah, and will mourn for the Pierced One

10 “And I will pour on the house of David and on the inhabitants of Jerusalem the Spirit of grace and supplication; then they will look on Me whom they pierced. Yes, they will mourn for Him as one mourns for his only son, and grieve for Him as one grieves for a firstborn.

Question: When did Israel pierce her Messiah?

For the answer let’s look to the Prophet Daniel, chapter 9:24-27; and please pay close attention to this prophecy, as it will literally blow your mind—as it is a mathematical prophecy that counts to the very day from the decree that was given to rebuild Jerusalem after 70 years of Babylonian captivity, until Messiah would be cut off—meaning killed—for the sins of His people:

Now let’s look to what the Bible prophesied regarding the descendants of Ishmael, and then look around you at the Arab Israeli conflict, as it exists today!

This is what the Bible says of the descendants of Ishmael:

Genesis 16:12
And he (Ishmael) will be a wild man; his hand [will be] against every man, and every man’s hand against him; and he shall dwell in the presence of all his brethren.

Here Dennis Prager gives us a look at the truth behind this conflict between the descendants of Isaac and Ishmael today:

This is where it ALL started, in a covenant which God made with father Abraham:

1 When Abram was ninety-nine years old, the LORD appeared to Abram and said to him, “I am Almighty God; walk before Me and be blameless. 2 And I will make My covenant between Me and you, and will multiply you exceedingly.”

3 Then Abram fell on his face, and God talked with him, saying: 4 “As for Me, behold, My covenant is with you, and you shall be a father of many nations.

5 No longer shall your name be called Abram, but your name shall be Abraham; for I have made you a father of many nations.

8 Also I give to you and your descendants after you the land in which you are a stranger, all the land of Canaan, as an everlasting possession; and I will be their God.”

Let the nations of the world be forewarned for the Bible says clearly that any nation or people that comes against or threatens the nation of Israel in any way is bringing God’s judgment and a curse upon themselves; as God’s promise was to bless all those who blessed Abraham’s descendants, and to curse all those who would curse her! Selah