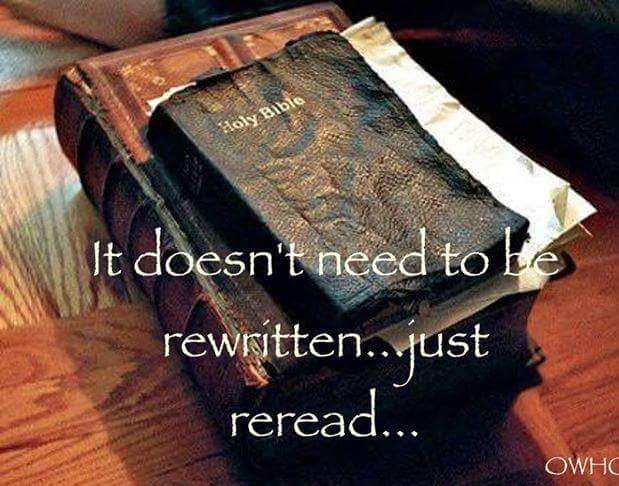 HOW TO READ THE BIBLE

“The Bible’s hard for me to understand,” I’ve heard people say.

“I’d like to read it, but I just don’t have that much time.”

There are as many reasons for not studying God’s Word as there are people, but there is nothing I know of that is more critical to Christian growth than the Bible.

When we read, it is important to look at the passage in context, with an eye toward the history and culture of the time.

When there are parallel passages in other books of the Bible, we should read them as well.
“The Bible’s hard for me to understand,” I’ve heard people say.

“I’d like to read it, but I just don’t have that much time.”

There are as many reasons for not studying God’s Word as there are people, but there is nothing I know of that is more critical to Christian growth than the Bible.

When we read, it is important to look at the passage in context, with an eye toward the history and culture of the time.

When there are parallel passages in other books of the Bible, we should read them as well.

We are not to seek Biblical support to validate our own circumstances-we are to seek the truth, and apply that truth to our circumstances.

Too many people place themselves above the Bible when they should be placing themselves under its authority.

An old German pastor told his congregation to read the Bible as a shipwrecked person who had lost everything at sea.

A shipwrecked person is a defeated person. He is needy. We ought to read the Bible with the idea that we have nothing of our own: no righteousness, no merit, no assets.

A shipwrecked person is a desperate person. If you are out in the ocean and see a piece of debris floating by, you don’t wait for a bigger piece. You cling to whatever comes along and hope it will hold you up.

We should come to the Bible with a desperate hope to hear from God and to be taught by His Holy Spirit.

We need His Word to stay afloat in life. What a shipwrecked person needs most is deliverance, and deliverance is the theme of the Bible from beginning to end.

It is the scarlet thread of salvation that runs from Eden to Patmos and everywhere in between.

You and I need God’s Word like we need air to breathe and water to drink.

Don’t neglect personal reading and study of the Bible for any reason. It’s simply too vital to miss. It will keep you afloat!
Memory Verse 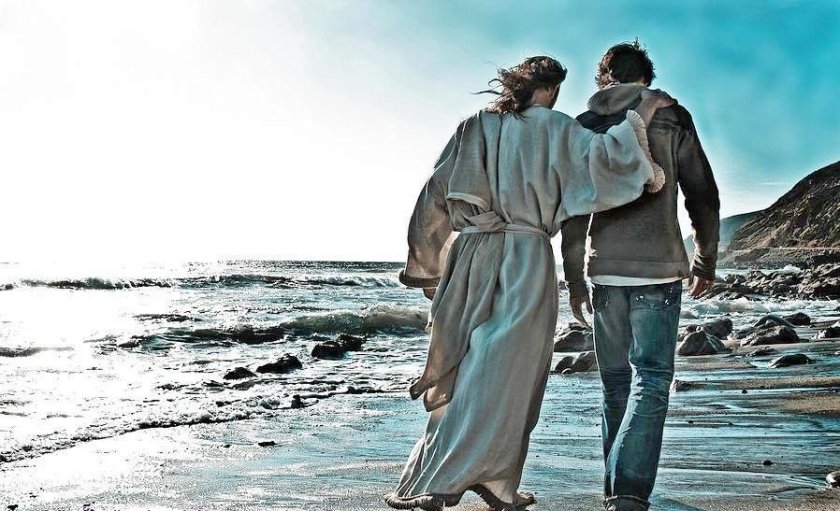 The Bible tells us, in Matthew 26:28, that just before Peter denied Jesus three times, the Scriptures says that he was following Him from afar.

“And Peter was following Him (Jesus) from afar, even to the court of the high priest. And having entered within, he was sitting with the guards to see the outcome.“

As Christians, meaning Jesus disciples (His followers), we are to follow in His footsteps (see 1 John 2:6); and in the Hebrew culture it means to follow close enough to literally be covered in His dust.

Have you noticed it can take thirty minutes (or less!) to get outside the will of God, and thirty years (or more) to get back to the place you were before sin invaded your life?

When we lose spiritual ground, when we retreat before the enemy, when we revert to our old ways, it is tough going back.

We may confess, make restitution, and start over again with a clean slate, but somehow we don’t feel the presence of God like we did before.

Joshua experienced this. He led Israel to a great victory at Jericho. Then God’s people suffered a crushing defeat at Ai.

When the sin at the root of that defeat was exposed, Joshua dealt with it. Then he humbly received instructions on how to win back the city he had just lost.

It was nothing like the way he won Jericho. Joshua learned that following a holy, awesome, powerful God is not a cookie-cutter proposition.

One day is not just like the next. One victory does not become the prescription for all victories.

Not only did God have a plan for the re-capture of Israel’s lost ground-He had a word of tender encouragement to his defeated leader.

“Do not fear or be dismayed,” He told Joshua.

Defeat is no cause for fear or depression. We will experience defeat in the Christian life, but it is not a permanent condition.

It is only a temporary setback. Even when a Christian loses the battle, his God has won the war.
Memory Verse

JOSHUA 8:1
…go up to Ai; see, I have given into your hand the king of Ai, his people, his city and his land.

This is why our continual 24/7 connection with God (see 1 John 5:17), through the Holy Spirit, and our daily immersion in God’s word are BOTH vital to every single Christian.

We were made to have this continuous relationship with God, and without it we are ALL like fish out of water, flopping around on the shores of life looking for our way back home.

We also must realize that when we go against God’s will and purpose, for our life (NOTE: this is what the nature of sin is), there are inevitable consequences that have a ripple effect to all those around us, including those in our family.

As Christians, this is something we all do by virtue of the fact we are human and are therefore constantly having to battle against our old nature, in our flesh; nevertheless thank God that He has made provision for us in 1 John 1:9, which says that “if we confess our sins He is faithful to forgive us of our sins and cleanse us from all unrighteousness.”

This is key and is something that we ALL should keep centermost in our mind, that because of the sacrifice of Jesus Christ, on calvary’s Cross and His poured out blood, that the accuser of the Brethren has lost all of his Leverage and that God has taken our sin and placed it as far as the East is from the West (see Ps 103:12), and so now there is no condemnation to those who are in Christ!

Nevertheless in the natural life there are always consequences to having strayed from the Path, and the above devotional is talking about what some of those consequences are.

As Christians, we must always recognize that the enemy is always trying to push us off course and cause us to compromise.

The same is true for us as Christian, and the way we achieve our course correction is by daily repentance, meaning to daily adjust the way we are thinking, through our meditation and immersion in God’s Word.

The verse I would like to reference, first off, along this topic, is 1 Corinthians 13, verses 4 – 7, which addresses the topic of what does the God kind of love [Agape] look like:

4 Love is very patient and kind, never jealous or envious, never boastful or proud, 5 never haughty or selfish or rude.

Love does not demand its own way. It is not irritable or touchy. It does not hold grudges and will hardly even notice when others do it wrong.

6 It is never glad about injustice, but rejoices whenever truth wins out.
7 If you love someone, you will be loyal to him no matter what the cost.

You will always believe in him, always expect the best of him, and always stand your ground in defending him.

Now mind you, this is exactly the way God deals with each one of us, and aren’t we called in Scripture to put on the mind of Christ (Php 2:5).

Out of necessity, in order for us (as Christians) to put on the mind of Christ and to bear this fruit of love in our life, it requires that we learn to be long-suffering, just as God has been and continues to be long suffering with us.

What does the Bible mean by longsuffering?

It has been said that longsuffering means “suffering long.” That is a good answer, but a better definition is needed.

The word longsuffering in the Bible is made up of two Greek words meaning “long” and “temper”; literally, “long-tempered.”

To be longsuffering, then, is to have self-restraint when one is stirred to anger. A longsuffering person does not immediately retaliate or punish; rather, he has a “long fuse” and patiently forbears.

Longsuffering is associated with mercy (1 Peter 3:20) and hope (1 Thessalonians 1:3). It does not surrender to circumstances or succumb to trial.

The believer in Jesus Christ receives the very life of God, His divine nature (2 Peter 1:4). That life produces certain characteristics (fruit) that are displayed in the believer as he obeys the Holy Spirit who lives within him.

One of those godly characteristics from Galatians 5:22–23 is “longsuffering.” The word is translated “patience” in the New American Standard Bible. Longsuffering is to be exhibited by all believers (Ephesians 4:2; Colossians 1:11; 3:12).

The old nature can be very short-fused at times, and we tend to strike back against offenses with unkind words and unforgiving spirits.

By obeying the Holy Spirit, the believer in Christ can say “no” to retaliation and exhibit a forgiving and longsuffering attitude.

The ultimate example of God’s longsuffering is His waiting for individuals to respond in faith to Jesus Christ.

God is not willing that any should perish but that all should come to repentance (2 Peter 3:9). Have you made that decision to believe that Jesus Christ died on the cross for you and that He rose again to provide forgiveness and eternal life? If not, read Romans 10:9–13.

One of the benefits of our having to reach out and minister to the lost and also for us to disciple new Believers, it is necessary for us to learn how to walk in Agape love.

For that to happen, it will be necessary for us to die to our self and give God permission to use us as His conduit, that He would be able to channel His love through us.

As the Scripture says, “Jesus is the Vine and we are the branches;” and it is impossible for a branch to bear fruit apart from being attached to the Vine.

As with most things, when it comes to our learning to move in the Spirit, it has to do more with our allowing God to change our attitude, while feeling the heat and frustration of the moment.

The bottom line here is that we are ALL called to love others as God loves us.