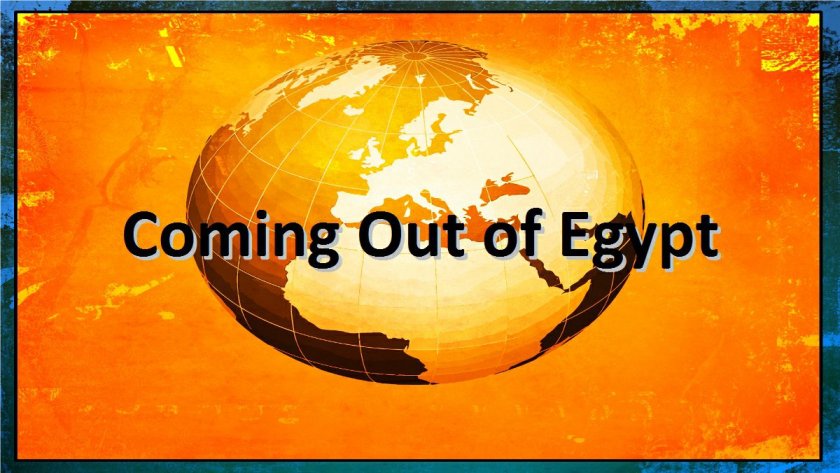 As God did in Egypt, God is likewise delivering us out of our modern day bondage (slavery) to the world system...

In three short months, just like He did with the plagues of Egypt, God has taken away everything we worship.

God said, “you want to worship athletes, I will shut down the stadiums.

You want to worship musicians, I will shut down Civic Centers.

You want to worship actors, I will shut down theaters.

You want to worship money, I will shut down the economy and collapse the stock market.

You don’t want to go to church and worship Me, I will make it where you can’t go to church”

“If my people who are called by my name will humble themselves and pray and seek my face and turn from their wicked ways, then I will hear from heaven and will forgive their sin and will heal their land.”

Maybe we don’t need a vaccine, Maybe we need to take this time of isolation from the distractions of the world and have a personal Revival, where we focus on the ONLY thing in the world that really matters. JESUS.
(Posted on Fb, by Renee Hernandez)

The significance of the ten plagues...

The first plague, turning the Nile to blood, was a judgment against Apis, the god of the Nile, Isis, goddess of the Nile, and Khnum, guardian of the Nile.

The Nile was also believed to be the bloodstream of Osiris, who was reborn each year when the river flooded.

The river, which formed the basis of daily life and the national economy, was devastated, as millions of fish died in the river and the water was unusable.

The second plague, bringing frogs from the Nile, was a judgment against Heqet, the frog-headed goddess of birth.

Frogs were thought to be sacred and not to be killed.

God had the frogs invade every part of the homes of the Egyptians, and when the frogs died, their stinking bodies were heaped up in offensive piles all through the land (Exodus 8:13–14).

The third plague, gnats, was a judgment on Set, the god of the desert.

Unlike the previous plagues, the magicians were unable to duplicate this one and declared to Pharaoh,

“This is the finger of God”

The fourth plague, flies, was a judgment on Uatchit, the fly god.

In this plague, God clearly distinguished between the Israelites and the Egyptians, as no swarms of flies bothered the areas where the Israelites lived (Exodus 8:21–24).

The fifth plague, the death of livestock, was a judgment on the goddess Hathor and the god Apis, who were both depicted as cattle.

As with the previous plague, God protected His people from the plague, while the cattle of the Egyptians died.

God was steadily destroying the economy of Egypt, while showing His ability to protect and provide for those who obeyed Him.

Pharaoh even sent investigators (Exodus 9:7) to find out if the Israelites were suffering along with the Egyptians, but the result was a hardening of his heart against the Israelites.

The sixth plague, boils, was a judgment against several gods over health and disease (Sekhmet, Sunu, and Isis).

This time, the Bible says that the magicians “could not stand before Moses because of the boils.”

Clearly, these religious leaders were powerless against the God of Israel.

Before God sent the last three plagues, Pharaoh was given a special message from God.

These plagues would be more severe than the others, and they were designed to convince Pharaoh and all the people “that there is none like me in all the earth” (Exodus 9:14).

Pharaoh was even told that he was placed in his position by God, so that God could show His power and declare His name through all the earth (Exodus 9:16).

As an example of His grace, God warned Pharaoh to gather whatever cattle and crops remained from the previous plagues and shelter them from the coming storm.

Some of Pharaoh’s servants heeded the warning (Exodus 9:20), while others did not.

This hail was unlike any that had been seen before. It was accompanied by a fire which ran along the ground, and everything left out in the open was devastated by the hail and fire.

Again, the children of Israel were miraculously protected, and no hail damaged anything in their lands.

Before God brought the next plague, He told Moses that the Israelites would be able to tell their children of the things they had seen God do in Egypt and how it showed them God’s power.

The later crops, wheat and rye, which had survived the hail, were now devoured by the swarms of locusts.

There would be no harvest in Egypt that year.

The ninth plague, darkness, was aimed at the sun god, Re, who was symbolized by Pharaoh himself.

For three days, the land of Egypt was smothered with an unearthly darkness, but the homes of the Israelites had light.

The tenth and last plague, the death of the firstborn males, was a judgment on Isis, the protector of children.

In this plague, God was teaching the Israelites a deep spiritual lesson that pointed to Christ.

Unlike the other plagues, which the Israelites survived by virtue of their identity as God’s people, this plague required an act of faith by them.

God commanded each family to take an unblemished male lamb and kill it.

Any family that did not follow God’s instructions would suffer in the last plague.

God described how He would send the death angel through the land of Egypt, with orders to slay the firstborn male in every household, whether human or animal.

The only protection was the blood of the lamb on the door.

When the angel saw the blood, he would pass over that house and leave it untouched (Exodus 12:23).

This is where the term Passover comes from. Passover is a memorial of that night in ancient Egypt when God delivered His people from bondage.

First Corinthians 5:7 teaches that Jesus became our Passover when He died to deliver us from the bondage of sin.

While the Israelites found God’s protection in their homes, every other home in the land of Egypt experienced God’s wrath as their loved ones died.

This grievous event caused Pharaoh to finally release the Israelites.

By the time the Israelites left Egypt, they had a clear picture of God’s power,

God’s protection, and God’s plan for them.

For those who were willing to believe, they had convincing evidence that they served the true and living God.

Sadly, many still failed to believe, which led to other trials and lessons by God.

The result for the Egyptians and the other ancient people of the region was a dread of the God of Israel.

Even after the tenth plague, Pharaoh once again hardened his heart and sent his chariots after the Israelites.

When God opened a way through the Red Sea for the Israelites, then drowned all of Pharaoh’s armies there, the power of Egypt was crushed, and the fear of God spread through the surrounding nations (Joshua 2:9–11).

This was the very purpose that God had declared at the beginning. We can still look back on these events today to confirm our faith in, and our fear of, this true and living God, the Judge of all the earth.

What Q is saying:

Intel (from Q) is circulating about the possibility of the internet and all media ‘going dark’ for ten days from 1st – 10th April.

Q refers to ten days of darkness in drop number 88 from 5th November 2017.

Here is an excerpt…

We are certainly seeing ‘scare tactics’ from the mainstream media regarding the virus.

And Democrats are certainly ‘falling’.

Joe Biden is busy pretending that he has dementia in an effort to avoid being arrested.

Give that man an Oscar. And where is Nancy Pelosi these days? Adam Schiff?

Maybe they are heading to New Zealand. Apparently many expensive private jets are landing in our tourist hot spot of Queenstown, mecca for the rich and famous.

Elite escapees? As Q reminds us, the satanists can run but they cannot hide.

NO ONE ESCAPES THE PAIN. The SA in the Q drop is Saudi Arabia.

Q has often referred to the fact that USA will follow the lead of Saudi Arabia (as indicated by the arrow in the drop).

Currently Saudi Arabia is purging corrupt officials from their government – many arrests are taking place.

Interestingly, the Irish Prime Minister used the word ‘purge’ in an extraordinary St Patrick’s Day speech to his nation…

Come and join the Adventure!