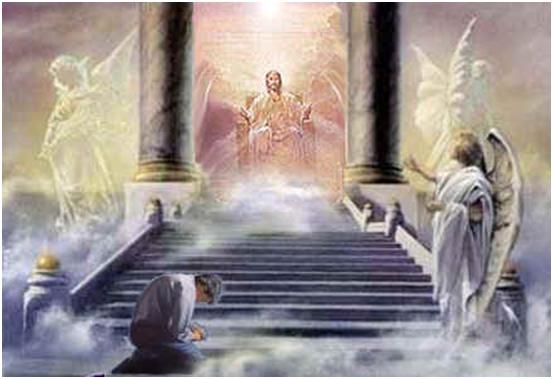 God’s solution to whatever troubles you today, to whatever battles you are fighting; and that’s regardless of whatever you may be feeling is keeping you separated from God.

Know this, God has not left you; and the reason you can know that this is true is because God has promised us, in His Word, that He will never leave us, nor forsake us; but the truth is, there are times when we may have left Him, and have sought after other things.

God’s solution is clear, and this applies to all of us… return to your FIRST LOVE!

Remember from whence you have come; when you first began, in your walk with the Lord, and return to that simple childlike faith again, that is all trusting and expecting.

Have a sense of expectancy about yourself, in your relationship with your Abba Father, as you base your confidence on the promises of His Word; and begin today to put into practice Psalms 100:4, and 1 Thessalonians 5:16-18.

We must go on the offensive, in our battle strategy, and not always be retreating, and allowing the enemy to keep us up against the ropes, in our battles; in the fears and doubts that he has put upon us.

Don’t let these fiery darts of fear and doubt take root in your thinking; and do not meditate upon them, and don’t give place to them in your life!

Stop meditating on your circumstances and problems, and the hopelessness of it all, as you see it with the eyes of your understanding; and instead, begin today… by turning to your Bible, and find a promise of God that deals with your situation, and begin to see those things, and begin to speak of those things that are not yet visible in the natural, through the eyes of your faith (as you place your faith in God’s Word); and begin, today and right now, to see and speak of those things that are not, as though they are!

Let us do as Abraham did, who is our example, who is called the father of faith; and let us learn from him, and do as he did, when he was given a promise by God that was impossible in the natural.

Taking our cue from father Abraham, here’s our God given battle plan:

16Therefore, [inheriting] the promise is the outcome of faith and depends [entirely] on faith, in order that it might be given as an act of grace (unmerited favor), to make it stable and valid and guaranteed to all his descendants–not only to the devotees and adherents of the Law, but also to those who share the faith of Abraham, who is [thus] the father of us all.

17As it is written, I have made you the father of many nations. [He was appointed our father] in the sight of God in Whom he believed, Who gives life to the dead and speaks of the nonexistent things that [He has foretold and promised] as if they [already] existed.(A)

18[For Abraham, human reason for] hope being gone, hoped in faith that he should become the father of many nations, as he had been promised, So [numberless] shall your descendants be.(B)

19He did not weaken in faith when he considered the [utter] impotence of his own body, which was as good as dead because he was about a hundred years old, or [when he considered] the barrenness of Sarah’s [deadened] womb.(C)

20No unbelief or distrust made him waver (doubtingly question) concerning the promise of God, but he grew strong and was empowered by faith as he gave praise and glory to God, 21Fully satisfied and assured that God was able and mighty to keep His word and to do what He had promised.

22That is why his faith was credited to him as righteousness (right standing with God).

23But [the words], It was credited to him, were written not for his sake alone,

24But [they were written] for our sakes too. [Righteousness, standing acceptable to God] will be granted and credited to us also who believe in (trust in, adhere to, and rely on) God, Who raised Jesus our Lord from the dead,

25Who was betrayed and put to death because of our misdeeds and was raised to secure our justification (our [a]acquittal), [making our account balance and absolving us from all guilt before God]. Selah

So today, take up the Sword of the Spirit, and prepare yourself for battle; and put on your entire battle armor that you may be prepared for what awaits you in the battles you will face today.

The Bible says that we are more than conquerors through Christ, who loves us; through the work and the battles that He has already fought for us, and better yet, has already won for us!

The enemy is already defeated, and God has taken from him any ability to do us arm; but he plays a pretty good bluffing game; and we must be prepared… for the battleground begins in our mind, in our perception, in our attitude, and our understanding!

That’s why we are told in Proverbs 3:6 to “Trust in the Lord with ALL our heart, and lean NOT upon our own understanding!”

Then we are told, after having done that, begin to acknowledge Him in ALL of your ways, and then He will direct your path!

The enemy has no power over us, but such as we give to him; and we may defeat him as long as we will stand in faith, in that Name that is above all names, in the Name of Jesus Christ; and in the power of the Holy Spirit!

Let us begin today to lay hold of His promises, and apply them to our situations, our problems, and our trials.

This is the strategy which God has ordained for us; and if we are not following His instructions, as found in the Bible, then it is we who must change!

That change starts with our repenting, which means literally to change the why we think!

So go forth into your day today, with the knowledge of who you are, in Christ; and who it is that you represent; even as Jesus said that: “All power is available to Him, in heaven and in earth,” so we are to go forth in His name, and in His POWER… to do the work He has called us to do!”

Remembering always that His banner over us is LOVE!