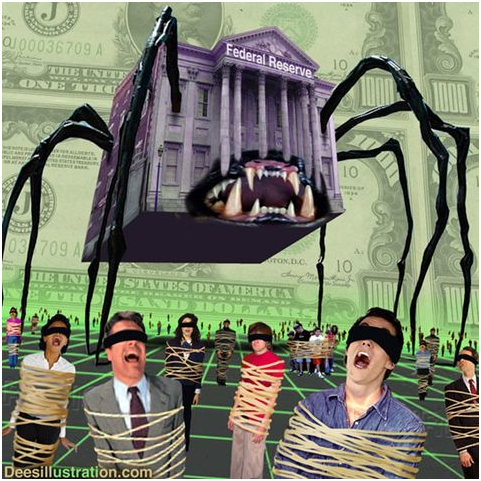 Who is behind our economic crisis?

I ran into a man yesterday at lunch, and we started talking about the Federal Reserve. He had not heard the truth behind this organization before, and he asked me to send him some more information.

So I’m sending it out to everyone.

Here is a link a video that explains how the FED operates:


Here is a video about the history behind the Rothschild International Banking Cartel, which today owns and controls our Federal Reserve System:


Here is the history behind the Federal Reserve System, and how it began: http://www.khouse.org/articles/1995/63/.

President Kennedy was one of the few presidents we have had who was not in these bankers pocket: http://www.john-f-kennedy.net/thefederalreserve.htm.

Who owns the Federal Reserve Bank?

These are the people who are the real criminals, who have been ripping off the American Treasury for over 96 years; and if you don’t believe me, just look at the following graph:

Read what President Woodrow Wilson said, about how he betrayed his country by signing the Federal Reserve Act, in 1913:

Three years after the initiation of the Federal Reserve, Woodrow Wilson said:

“I am a most unhappy man. I have unwittingly ruined my country. A great industrial nation is controlled by its system of credit. Our system of credit is concentrated. The growth of the nation, therefore, and all our activities are in the hands of a few men. We have come to be one of the worst ruled, one of the most completely controlled and dominated Governments in the civilized world no longer a Government by free opinion, no longer a Government by conviction and the vote of the majority, but a Government by the opinion and duress of a small group of dominant men.”

Make no mistake; the ultimate goal of these men is world domination, and the establishment of a “New World Order,” and ultimately a one world monetary system that they will control.

This concept of a “New World Order” was first introduced by none other than former President George H.W. Bush, in a speech which he made back in 1991. Listen for yourself:


Ever wonder why our media is so managed and one sided? Well  these same bankers long ago, when they first established the Council on Foreign Relations (CFR), one of the first things they did was devise a plan to control the media:


These are the true power brokers who have corrupted our politicians, our media, whose influence and control have taken God out of our public schools, and have slowing but surely been undermining our Constitutional Republic, for well now over 100 years.

Don’t just believe me, do your own homework, and check these facts out for yourself.

You know the Apostle Paul warned us NOT to be ignorant of the Enemy’s strategies and devices; and Jesus said for us to be wise as serpents, and harmless as doves.

Most Americans are completely ignorant of this history, and these facts; and it is one of, if not the biggest fraud ever, in the history of the world!

Here are a few excerpts from Rep. Louis T. McFadden, which he made on the floor of House of Representatives on June 10th, 1932:

Some people think the Federal reserve banks are United States Government institutions. They are not Government institutions. They are private credit monopolies which prey upon the people of the United States for the benefit of themselves and their foreign customers, foreign and domestic speculators and swindlers, and rich and predatory money lenders. …

Those 12 private credit monopolies were deceitfully and disloyally foisted upon this country by bankers who came here from Europe and who repaid us for our hospitality by undermining our American institutions. Those bankers took money out of this country to finance Japan in a war against Russia. They created a reign of terror in Russia with our money in order to help that war along. They instigated the separate peace between Germany and Russia and thus drove a wedge between the Allies in the World War. …

Mr. Chairman, when the Federal reserve act was passed the people of the United States did not perceive that a world system was being set up here which would make the savings of an American school-teacher available to a narcotic-drug vendor in Macao. They did not perceive that the United States was to be lowered to the position of a coolie country which has nothing but raw materials and heavy goods for export. That Russia was destined to supply man power and that this country was to supply financial power to an international superstate–a superstate controlled by International bankers and international industrialists acting together to enslave the world for their own pleasure.

The enemy has been working against us for a very long time, and in that time he has entrenched himself in virtually every area of our culture and society; but folks the church is not down for the count yet… not by a long shot! For greater is HE who is in us, the Lord Jesus Christ, than he who is in the world.

Jesus said in no uncertain terms that, “I will build my church, and the gates of hell shall not prevail against her!”

That’s us, folks, but we have to stop being on the defensive all the time, cowering in fear, pinned up against the ropes in the battles and struggles of life.

God will move on our behalf, if we get on board with His program; but for that to happen, we must follow His instructions.

This is where it begins:

14 If My people who are called by My name will humble themselves, and pray and seek My face, and turn from their wicked ways, then I will hear from heaven, and will forgive their sin and heal their land. Selah

One thought on “Who is behind our economic crisis?”